On this page, you'll find volunteer opportunities for Issa's case, helping with international advocacy and the Twitter storm. For questions or more opportunities, please contact: [email protected]. Find out more information on the case or go to sign the petition. 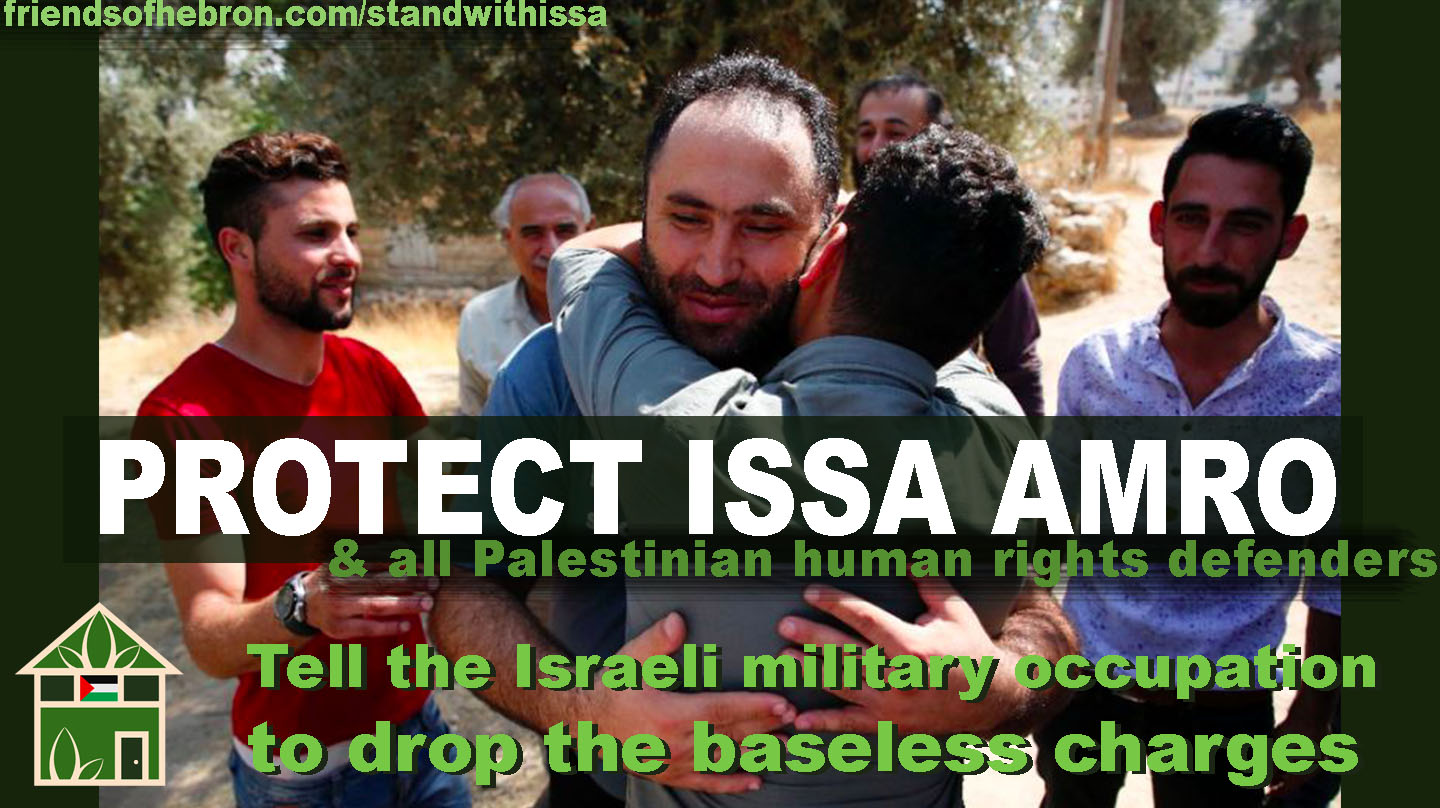 Please participate in the Twitter storm and recruit others to participate. Please post the materials on Twitter and other social media in the time mentioned and please send pictures and video materials to [email protected] with the headline "Twitter storm"

Please take pictures of yourself holding up signs in support of Issa's case with one or more of the hashtags. Write short statements, such as "No Justice in Military Court" or "Issa Amro Should Go Free" or "Protect Human Rights Defender Issa Amro" or "Palestinians Have A Dream." You can also hold up a picture of Issa.

Please take a video of yourself with short statements as to why you believe Issa Amro should go free. Here are examples:

“As Amnesty International has stated, Issa Amro’s charges are “politically motivated” because he non-violently campaigns for the end of Israeli apartheid and the occupation”

“Issa, as other Palestinians who non-violently resist Israel’s occupation and apartheid, has been convicted for demanding Israel comply with international law”

“Issa has been convicted of  6 trumped up charges that would not stand in any liberal democracy. Protesting occupation and apartheid is not a crime, but a moral obligation”.

“Martin Luther King Jr. had a dream, it should not be a crime for Issa and other Palestinians to have one, nor to protest until that dream becomes a reality”

We will provide sample tweets to be used on the day for the twitter storm and photos to go along with it.

We need people to volunteer to reach out to their communities, local media outlets, politicians to advocate for Issa's case. Please email: [email protected] for more details or update us about your progress.

Please call and email your local Senator, House Representative or Member of Parliament and call on them to:

• Raise an official question with the government asking about Issa's case.

• Make a public statement in support of Issa Amro.

• Contact the Israeli embassy or consulate about Issa's case to show that internationals are aware of it.

• Set up a meeting with Issa or a representative of his case.

Reach out to your community centers, activist groups, local charities, religious organizations and churches, and ask them to:

• Organize an informative event on the Israeli occupation, the military court system, and Issa's case.

• Call on their politicians to speak up on the case

Please contact your local media organizations and encourage them to:

• Publish articles or news reports on the case.

• Set up interviews with Issa or a representative of his case.

Reach out to writers, journalists, celebrities, professors, and notable community members and ask them to make public statements or write op-eds on the case.

Don't forget to SIGN THE PETITION and encourage others to do so as well.